Head Hunters has now been playing Call of Duty 4 competitively for the past year and a half. We have proven to do very well after our successes in the past. We began our CoD4 career with Hardcore TDM. We have reached the top of several ladders and held our own against the top clans on TWL. Our main focus now is on the Search and Destroy with ProMod leagues. The screenshots listed below are just a few of the several competitions that we have dominated as a team.

TWL has been a great time and we have enjoyed our experiences thus far. We currently play on TWL for practice and are now participating in the TGL league. More screenshots will be posted of our recent successes.

Head Hunters clan was founded on the 20th of Feburary in 2001. It has been now been seven long years and the clan has been through a lot! I cannot tell you the entire clan's history myself because I joined the clan in 2003, just in time to demolish other teams in the UT Strike Force Spring 2003 Cup. But we'll get to that in a second. Head Hunters used to play a mod for the original Unreal Tournament called Strike Force. We still find it more entertaining than any other game out there because of its fast gameplay and its excellent community of players. We still play weekly on every Tuesday and Friday at 9pm eastern time. If you would like to join us please head to our downloads page and follow the instructions. Everything is free, so you do not have to worry about going out and buying anything. This free mod also continued onto the Unreal Tournament 2004 engine. The game did not last as long as the previous Strike Force because of the bugs and the amount of time that was spent before it was actually released. We continued to support our favorite mod until it eventually died out again. Now we are keeping the old one alive and plan on playing competively in Call of Duty 4 on both PC and PS3. We just recently made this transition onto the consoles. Now on to the exciting accomplishments this clan has achieved.

Let me begin off by saying that Clanbase has held every competition and ladder for Strike Force from day one. Big thanks to the site and all of the admins who volunteered their time to set up every ladder and every cup/competition. In the Spring of 2003 (right after I joined) Head Hunters participated in the UT Strike Force Spring 2003 Cup. We went into this cup with an amazing group of guys. The best of the best. A team well picked out by our leader/founder, TheHunTeR. We had the best players in North America and if you haven't visited the cup link by now you can find us in first place. Yea, amazing huh! We managed to win our way to the top with a 8-0-0 record. We were now the big dogs on the servers and it wasn't the end of our road to success as a team. With ease we dominated the North American ladder, clan war after clan war. Challenge after challenge, eventually we got bored with the NA ladder and decided to move on to the International ladder after our big success with the Spring Cup. Our total war outcome for the NA ladder turned out to be 76 wins, 6 losses, and 1 tie. Seem like a good record to you? 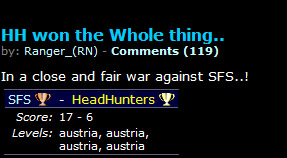 Well by now we were like a family and still growing strong as a team. We kept with our game and we had lots of wars, trying to get in one or two wars a weekend to get our rank even higher on the International ladder. Our goal: #1! Well thats just what we did! One war at a time we slowly moved our way higher and higher up the ladder. Well all those wars added up and eventually we were on a 36 war win street and ended up with the rank: first in the World. So now we were #1 on the NA ladder and the INT ladder and already had 1 gold cup under our belts. Our total war outcome for the INT ladder turned out to be 56 wins, 13 losses, and 1 tie. Time for another cup? I think so! Shortly after we took first in the world that summer of 2003 came the UT Strike Force Fall 2003 Cup. This was my second cup with Head Hunters and we had a lot of motivation due to our success so far. Well our excellent communication and our skills to pull it together as a team brought us another astonishing victory with another first, another gold cup! We had a record of 9-0-0 to win the cup. Thats right, we now had two gold cups under our belts. It sure as hell wasn't easy to get them either. Oh and almost forgot to mention that I was the Co-Supervisor of the Fall 2003 cup. The Europeans sure didn't like an American being a supervisor, but it seemed to run pretty smoothly.

Finally, to the last cup HH participated in before the game and community started to dwindle down a bit, UT Strike Force Spring 2004 Cup. By now this was just routine. We had already won 2 cups, why not win another one before Strike Force 2004 came out. Well, why describe it more. You can guess what happened! We won another cup, making that our third and final cup under our belt for Strike Force '99 with a record of 8-0-0. Now I want to bring up a ladder that I didn't mention in my little clan history before. We also participated in a 2 on 2 ladder. You bet your ass we were #1. Our total war outcome for that ladder turned out to be 87 wins, 7 losses, and 5 ties. 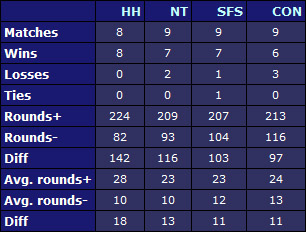 We will be participating in more cups/ladders for several different games for years to come. So keep a look out for us on the servers. This is Head Hunters clan history according to me. Signing out...